I facilitated several Asatru Midsummer rituals in several prisons the last couple weeks, but this one in particular will stay with me, because of the efforts and creativity of the inmates. Check out these pictures: 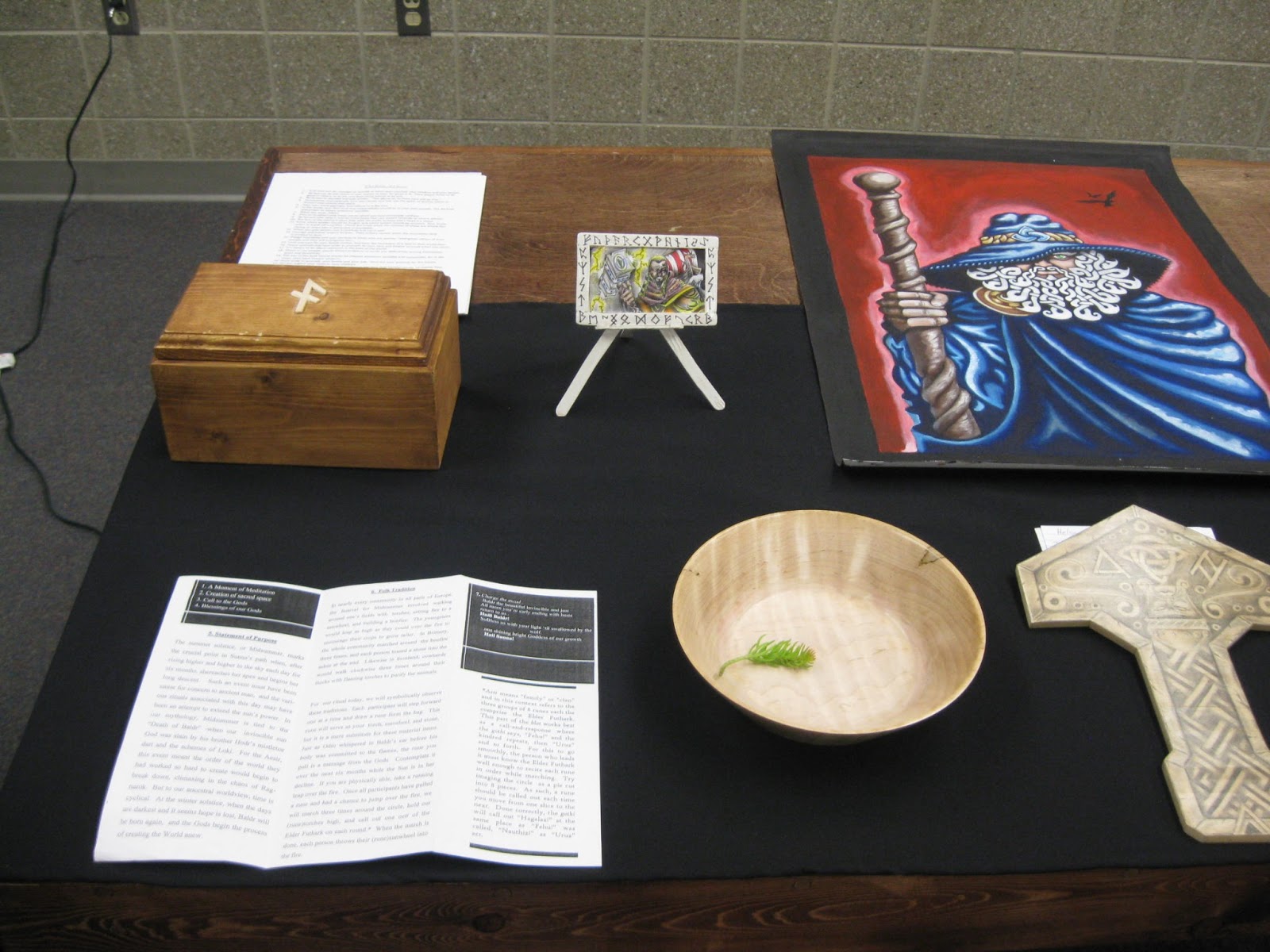 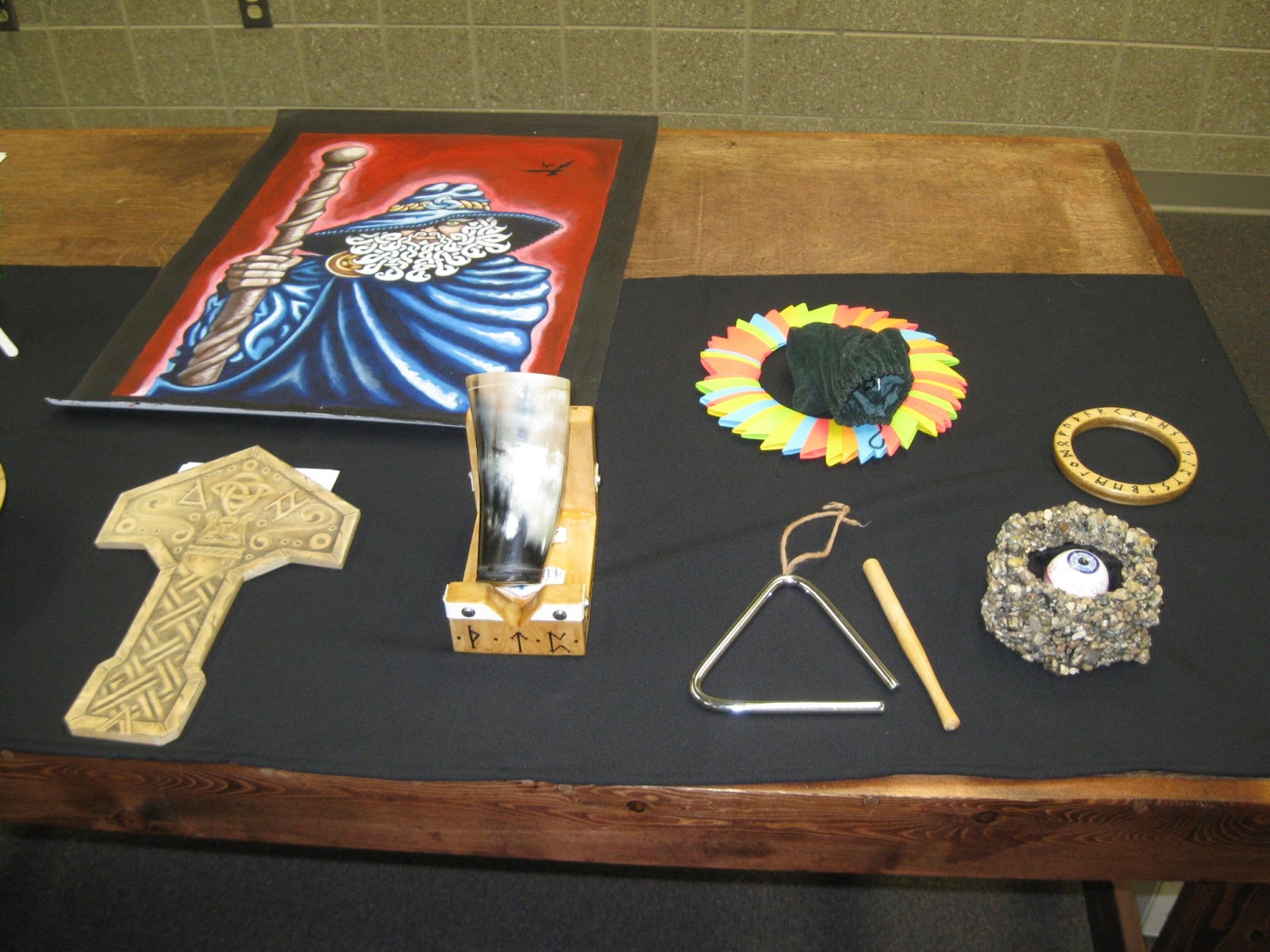 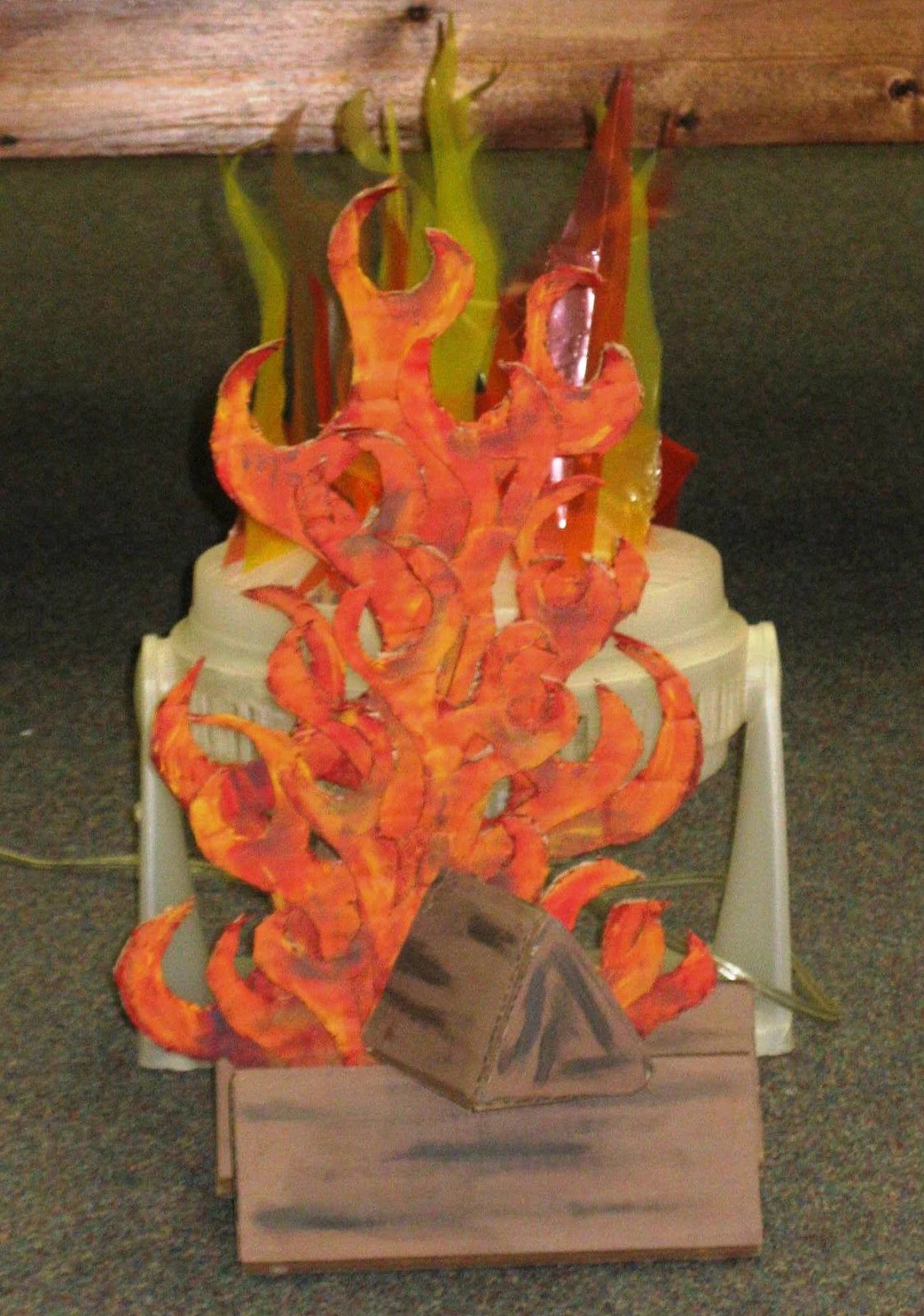 The top picture is one side of the altar; the top row is a wooden box and two paintings, both by inmates. The bottom row is a copy of the readings done in the ritual, a wooden bowl, and a wooden Thor's hammer.

The next picture is the other half of the altar; top, another view of the painting of Odin, and a Sunwheel with a bag of runes in the center. The Sunwheel was made by each of them folding points from bits of paper, and then joining them all together. Top right is an oath ring. Bottom row; another view of the Thor's hammer, the drinking/toasting horn, a triangle, and a grotesque but religiously symbolic piece of art: Mimir's Well, with the Eye of Odin.

The bottom picture is the piece de resistance: the bonfire. The logs and flames are cardboard; behind them was a fan with red and yellow streamers dancing in the breeze- a startlingly effective illusion.

The creativity and focus of the offenders never ceases to amaze me... and make me wonder if they'd be there at all if society had drawn these qualities out earlier.
Posted by Joel Monka at 6/20/2013 12:39:00 PM 2 comments:

It cannot be locked in, or locked out; this has been something I've learned in the course of prison ministry. Colleen (founder of Indianapolis Pagan Prison Ministry) and I experienced that once again last Friday at at new prison we've just started at- this was our third visit. I cannot improve on Colleen's telling of it, sent out to all of us in IPPM:

A friend wrote to me (about prison ministry he is doing):

"Our offenders are beginning to understand that there is a little more out there than what they thought and some of them are confused about the potential love that awaits them in the world."

And I replied: Yesterday I saw the same light of possibility on the faces of a couple of the long term inmates in my Asatru group. Their assignment was to pick one of the 9 Noble Virtues - one that they particularly need to work on ... write at least one paragraph on the virtue, why they need to work on it and how they plan to implement change.

When they shared and others did not judge them ... but the group (not me) offered support and suggestions ... you could see hope in some of their eyes.
Hope that a brother understood them, hope that there were hands reaching out to offer support and hope that they could and would be accepted.

It is that kind of miracle that changes lives (mine and theirs) for the better. It restores my hope for mankind and gives me energy to continue the work.

This is why people like me continue to do this work  ... Colleen

I thank each of you for your sacrifice of ministry and for the hope you bring with you every time you enter a facility or follow up with someone who has gotten out and is fighting the good fight. You make a difference in the world.
Posted by Joel Monka at 4/20/2013 06:19:00 PM No comments:

It's been a month since I said I was back, and no post. I had laid out times to write, and taken notes on a hundred subjects, but every time I sat down with pen in hand, I kept encountering analysis paralysis... I found myself sympathizing with Rev Wells who wrote "I think I know why I’ve had such a hard time getting back into blogging. I just can’t convince myself there’s much I can add that would help.". I've been at it for years, with little evidence of progress.

There's two ways of looking at the long term- first, that the difference is being made whether you see it or not; no one person sees the eroding effects of their own footsteps, but the ancient stone steps do get worn away in time. The other is that continuing to do the same thing over and over without observable change is the very definition of psychosis.

I'm not worried about being perceived as a psychotic, or about being one; I suspect the psychotic has no trouble with motivation. That just leaves the question of whether continuing is a meaningful exercise or an ego driven waste.
Posted by Joel Monka at 2/06/2013 11:19:00 AM 5 comments:

As you probably figured out, I've been taking a sabbatical from UU, both church and blogging. After all I'd been through in two different congregations, I needed time to get back to my spiritual roots. While I'm not ready to commit to another congregation, I am ready to pick up the pen again, and talk about the things I get from UU- even if only from a distance, for the nonce- and my life.

I thought I'd begin my return by bringing your attention to a blog post that made me laugh because it reflected perfectly how intertwined the two major influences in my spiritual life are. Though written by a Pagan, any UU will recognize the writer's dilemma- the difficulty devising an "elevator speech". He comes up with an elegant solution he calls The pagan sensibility "Not a statement of the True Pagan Nature or an explanation of the Pagan community, but a description of what kind of thought and action makes things pagan flavored. I think that one can describe that briefly and clearly, including everything one wants while excluding everything one doesn't.

The pagan sensibility sees the divine in the material world ... and so regards the human as sacred.

The pagan sensibility apprehends the Cosmos as composed of a multiplicity of different interconnected forces ... and honors all of those forces."

This naturally got me thinking... is there a UU sensibility? If so, how would you describe it?

Some thoughts on leaving church

WARNING: If you’re expecting fair, balanced, reasoned debate, just move along to the next blog. I’m angry, sad, bitter, and grieving; I have no intention of trying to hide it.


In just over a year I've left the UU congregation I’d belonged to since 1996 and been married in, joined another congregation- and now I've left that one, too. And no, I’m not some lone, hotheaded malcontent; in both cases I was one of many in a mass walkout that I had no part in instigating… and the combined total of those two walkouts would rival the regular attendance of either congregation. I don’t have exact counts, as many- myself included- merely walked without posting angry letters or speaking out at congregational meetings, but the numbers of disaffected were very large, and many, many letters were circulated. Here is a sample that could have come from either church; it doesn't really matter which, as they were all similar:

We are writing to let you know that we have resigned our membership with (that church) and will no longer be in covenant with its members.


In the ten years that we have been associated with (that church), it has become clear to us that (that church) does not have the capacity to become the type of church we are seeking. We believe that further investment of our time, talents, and treasures would ultimately be a waste. We are seeking out other opportunities for spiritual growth, sacred community, and service to others.


As part of the process of moving forward, we may not be seeing some of you again. This may include “unfriending” some of you on Facebook. We do not do this out of any animosity or ill-will. We do this as part of our process of transitioning from the past to our future path. We also do it as part of our healing process. We would ask that you respect our decisions with regard to this.


We wish you the best as you continue on your journey. We hope you find what you are looking for. May you always be blessed.


The walkout that was the immediate impetus for this post happened at a congregational meeting. About forty re-formed in the lobby and started singing the hymn/protest “There Is More Love Somewhere”; others were in line at the secretary’s desk to strike their names from the rolls, and still others just silently walked to their cars. We sang one chorus then joined that last group.


I’m not going to talk about the circumstances leading up to either split. I could say I won’t because the other side isn’t here to defend themselves, but that would be a lie; I don’t believe they deserve a defense. No, I’m not going into details because it’s too late in the day to start gobbling antacids. But I will talk about a mindset, an attitude expressed in both splits. It can be summed up in a single line of argument, and I give fair warning: the next person to use this argument to me risks being spit upon.


I Call it “Waving The Chalice”… “This isn’t about you or me- think of the church! The church is bigger than any individual; it will still be there long after we’re gone.” I believe that anyone who could say that has never had a thought deeper than a bumper sticker, and is unworthy of being a UU minister.


“The Greater Good” is a truly noble explanation of why you’re sacrificing yourself; it is an evil sophistry when used to explain why you’re demanding the sacrifice of another. It is the cry of dictators, the logic behind Stalin’s “You can’t make an omelet without breaking eggs.” It’s doubly bad when you hear it at church. Tell me- if a church cannot be concerned with the individual, what institution on Earth can be? I will not fellowship with anyone who cannot imagine a situation in which the right answer is, “The need of the one is greater; this time, the many can yield.”… and so, I am an unchurched UU in Indy.
Posted by Joel Monka at 5/28/2012 06:46:00 PM 14 comments:

Of Deepities, the Gambler, and UU

Deepity is a term coined by Daniel Dennett in his 2009 speech to the American Atheists Institution conference. It refers to a statement that has (at least) two meanings; one that is true but trivial, and another that sounds profound, but is essentially false or meaningless. I had that experience, with no word to attach to it, when Kenny Rogers had a monster hit with “The Gambler”. Here are the words that drove people to tears, and a series of movies:

You never count your money when you're sittin' at the table

There'll be time enough for countin' when the dealing's done

Every gambler knows that the secret to survivin'

Is knowin' what to throw away and knowing what to keep

And when he finished speakin', he turned back towards the window

Crushed out his cigarette and faded off to sleep

And somewhere in the darkness the gambler, he broke even

I remember wondering if I was the only person in the whole country who realized that the Gambler had not said a damn thing for all his profound sounding words... Well, duh, HOW do I know when to hold them? What are the indicators that I should fold instead? What tells me that this card should be kept, and that one thrown away? Is there a formula for knowing whether to stand pat or run? For all those deep, profound words, there wasn’t a bit of practical advice I could actually USE- no ace to keep. I was reminded of that irritation when listening to Colleen Kessler - What do Unitarian Universalists Believe? Can anyone point to an ace worth keeping in all of that?